I thought I’d write a quick review of a newly-opened show at the Fashion & Textiles Museum in London in case you’re thinking of paying a visit to the city.

Zandra Rhodes is something of a one-off in the fashion industry. She has always ploughed her own unique furrow by being primarily a textile designer who then uses her beautiful fabrics to create exotic garments. They are not for the faint-hearted because they are frequently bright colours and intricate patterns but over the decades they have been worn by many high-profile personalities including Princess Anne in her engagement photos, and Princess Diana wore gowns by Zandra Rhodes to many events. Actress Elizabeth Taylor and Jackie Onassis were photographed wearing the gowns and, more recently, designers Anna Sui and Pierpaolo Piccioli of Valentino have commissioned her to design original textile prints for their own collections.

I was first aware of Zandra Rhodes while I was still at school when her punk-inspired collection of 1977 hit the headlines. Punk clothing was seen as something a bit scuzzy and tatty but her evening gowns were made in luxurious jersey fabrics adorned with rips and tears that were accessorised with chains and zips. Later on while I was a young student taking a one year art foundation course at college her use of striking colours really caught my eye.

The new exhibition features at least one look from every year of Zandra Rhodes’ fifty year career so there are many beautiful garments to see. One of the striking features of many of them is the embellishments. The signature dipped or pointed hems are frequently finished with tiny seed pearls or sequins, as are necklines or sleeves. A favourite fabric is silk chiffon which is notoriously difficult to work with, satin and velvet appear too.

As I’ve said in other reviews before the FTM isn’t a huge space so you get the chance to see the exhibits at very close hand and often from different angles. I’ve shared lots of my photos here although they aren’t in chronological order.

Because I’d bought a ticket for a meet-and-greet prior to the official opening of the exhibition we also had the chance to chat with Zandra Rhodes and get copies of the new book signed by her.

You might have noticed that I have pink hair (well, a pink fringe at any rate) I always admired Zandra’s pink hair but I always imagined there was someone (who?) or something (what?) that prevented me doing it. Eventually, about 4 years ago, I did it, and I’ve realised it was the subliminal influence of Zandra that had planted the idea. When I finally got the opportunity to chat to her I told her as much, which she seemed chuffed about, and we swapped pink-hair-dyeing tips!

Also, upstairs in the exhibition space, you can see how the printing process works. The designs are screen printed using huge frames and each colour in the design has its own screen. This means that each print run could have quite a few stages to the process depending on the number of colours.

The prints are meticulously placed on the fabric so as to utilise as much as possible and avoid unnecessary wastage too. There is film to watch too so you can see the exactly how carefully the prints are created by Zandra’s team. The finished fabrics are then passed to the atelier team of expert pattern cutters and sample makers who turn them into finished garments for each collection.

If you’re interested in seeing the work of a British fashion icon close up, and in the museum and gallery space which she herself originally founded incidentally, then get along there now. The show is on until January 26th (closed on Mondays) As a bonus, in a separate small gallery space, there is also a Norman Hartnell exhibition too with quite a few of his designs on display. If it’s a grey day in London it’s bound to cheer you up!

I wasn’t familiar with textile artist Anni Albers but when I saw that Charlotte (English Girl at Home) had made a visit from Birmingham I thought it must be worth a look.

I wasn’t disappointed either. You don’t need to have any previous idea of this artist’s work to enjoy and appreciate the quality of what you see before you in this exhibition at Tate Modern in London until January 27th, 2019.

To give you a little bit of background, Anneliese Fleichmann was born in Berlin, Germany in 1899, she was encouraged to study drawing and painting, becoming a student at the Bauhaus in 1922 where she met artist Josef Albers, marrying him in 1925. Not every class was available to women and she had been unable to get into glassmaking whilst at the Bauhaus [a renowned combined crafts and Fine Arts school from 1919 to 1933 before being closed by the Nazis] so she reluctantly attended textile weaving instead. She soon became fascinated by the whole process of weaving and gradually developed her distinctive geometric style.

She and her husband, who were both Jewish by birth although she herself was baptised a Protestant, eventually moved to the USA in 1933 where they taught at the experimental Black Mountain Academy in North Carolina, an art school with a kind of ’summer camp’ ethos of studies and farm and domestic work.

She continued to experiment and create throughout her long life although eventually she gave up weaving because of the physical strain it placed on her preferring, instead to create prints and monographs.

She was commissioned a number of times to create textiles for specific situations including domestic, hotels and student accommodation. These items included rugs and diaphanous hanging room dividers.

Here are just a few of my photographs, many don’t do full justice to the intricacies of the weave or the subtleties of the colours but hopefully they will give you a taste. 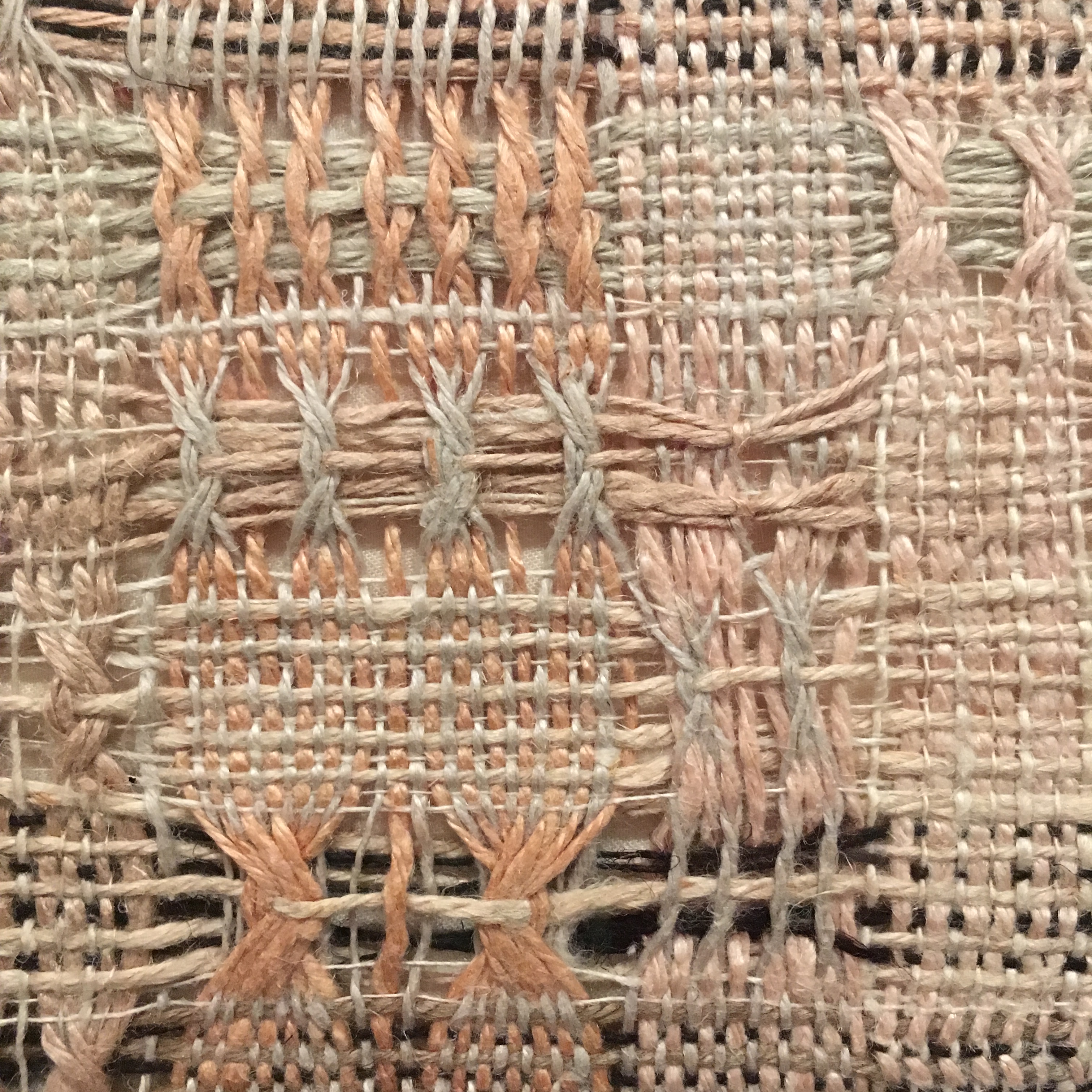 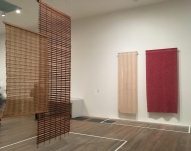 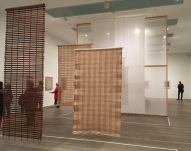 Albers moved on to drawing and printmaking as she got older, often her subject was knots! Top right is a rug. She continued to explore textile-related areas though such as pattern, line, texture and knotting.

In the same room there are 3 huge screens showing the process of weaving in close up which was enthralling.

As I said earlier, you don’t need to know anything about Albers to enjoy this exhibition. My good friend Jenny (my culture buddy!) is a busy Vicar with no art or textiles experience but we always find much to enjoy on our visits to galleries even if they are outside our usual preferences or knowledge. The work on display here is beautiful and tactile (but don’t touch!) and could look very much at home in a domestic setting, not something I can always say about some art work we’ve seen!

A very enjoyable and worthwhile exhibition,