When I chucked in my last job 4 years ago I had no idea what the future held…4 years on, the Stitch Room Sewcial is the sort of wonderful opportunity that has come my way and I couldn’t be happier.

Back in March Anne ( New Vintage Sewing) emailed me to ask if I’d be interested in an event she and Lucy (Sew Essential) were organising at Anne’s place of work-the Textiles department at Loughborough University. The bare bones of it sounded great and fortunately the timing was perfect, exactly between other things in the diary-the stars were in alignment! I found out that several of my sewing friends were also going, as well a number of ladies I hadn’t met before but was really  looking forward to having that opportunity. However, sadly, I noticed there were a few snippy comments on Instagram from one or two people who hadn’t been able to get one of the tickets that were put on open sale. Due to the size of the room and the activities planned it was limited to just 16 people and the accusations of ‘elitism’ were uncalled for-frankly if Anne and Lucy were putting all this effort into organising a 2 day event then they can invite whoever they jolly well like!! The sewing community is generally so supportive and inclusive and I was shocked, and sad, to see these types of comments published.

There was lots planned over the 2 days of the Sewcial  including some actual sewing! I decided to cut out a soft linen version of the Moana dress by Papercut patterns because I wanted a easy-to-wear dress for my upcoming holiday. I put in a couple of other pieces of fabric and suitable patterns in case I finished it and had time to spare (hah!)

I set off early on Friday morning with my sewing kit and a suitcase of me-mades to wear. We’d already been told that one of the things laid on for us was a photo shoot in the professional studio in the Faculty when we could have photos taken wearing our own makes.

I thought, just for once, I was going to be a bit early arriving but the Sat Nav had other ideas! I found the venue eventually and spotted my friends Clare (Sew Incidentally) and Kara arriving at the same moment-phew.

After coffee and hellos we were taken upstairs to the fantastically equipped room that is Anne’s domain. There was a domestic sewing machine for each of us to use and I didn’t get off to the best start with mine…I’ve used many different machines over the years but this computerised one flummoxed us completely, we couldn’t work out how to fill a bobbin!! After 15 minutes of trying, which included Lucy phoning the Sew Essential office for advice, consulting the instruction book (!) and randomly hitting buttons, I was eventually able to start sewing [it turned out to be the touch screen that was showing a pretty but unhelpful video] Then it was time for lunch!!!

Before any of this palarver though we split into 2 groups and some of us were shown around the printed textiles workshops and then the weaving workshops while the others were with Anne getting demos on all the machinery. 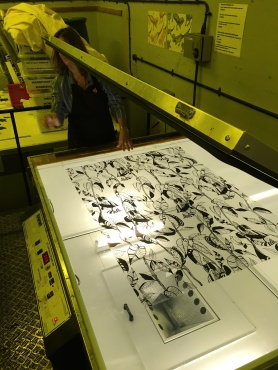 We were shown where the screens are produced in giant darkrooms, the huge quantities of different types of dye in every colour imaginable and the ‘kitchen’ the students learn to mix it all up in. 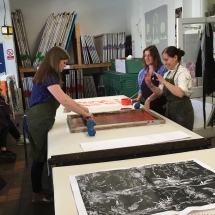 Salva and Rebecca ( Red W Sews) had a go at screen printing.

On next to the weaving workshops where there were an impressive number of looms of all types available for students to weave their own designs. It’s all quiet now as their work is finished and on display (more on that later) it must be really noisy when it’s full of students working. 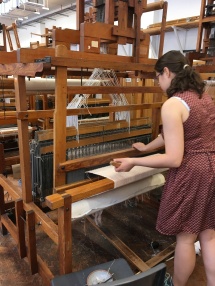 We had a demonstration of how the looms work and were told you need to swap legs every now and again otherwise you’ll get one super-muscly leg!! Each push down opens the warp threads for the shuttle with the weft yarn to pass through thus eventually forming the design.

This is the digital jacquard loom weaving a complex pineapple design, it’s noisy but amazingly fast. The hand loom in the previous picture uses a series of pegs through a small board to raise and lower the correct warp threads in order for the weft thread to go between them, this loom does all that for the weaver.

After our studio visit we swapped to return to Anne’s room where she showed us all the various, and impressive, industrial machines she has and which we can use as appropriate over the next two days.

Many years ago I went to college and then worked in industry for a few years so I was aware of some of these types of machines but most of my lovely friends have only been home sewers and they were bowled over by the speed and efficiency of them. Each machine performs a specific task, unlike domestic machines, there were machines for putting on bias binding in moments, rolled hem edging, and so quiet compared to industrial machines that I remember. There were also 3 and 4 thread domestic overlockers for us to use, and a cover stitch machine…sewing heaven really.

Time for a break after all that activity and information so we trotted off to the breakout room for lunch where we were greeted by this most wonderful surprise. It’s the sewing cake of dreams! Made by a former student of Anne’s, Becca @calicoandcake (who now makes ballet tutus and sculpted body suits as well as amazing cakes) 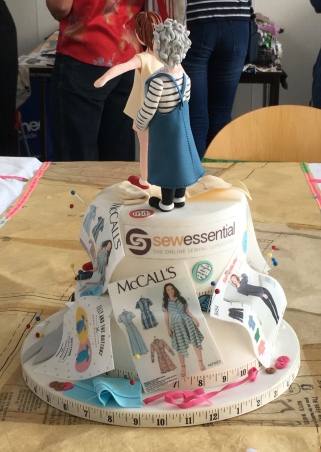 It has Anne and Lucy on the top! There were tape measures and scissors, patterns, buttons, pins, you name it. We were astonished and swooning over it [it tasted great too]

Before we returned upstairs Lucy and Anne handed out our personally labelled goodie bags….OMG they were terrific. There were several lovely, and useful, patterns as well as 2 metres of fabric and loads of kit like marker pens, machine needles, a box of thread, a fat quarter, an unpicker! loads of things. So generous of the various sponsors of the Sewcial-thank you so much.

Eventually we returned back upstairs to get down to some sewing and going to have our photos taken. Salva and I went together-she’s much more of a natural than me I have to say, the practice I’d had for Love Sewing magazine last Autumn wasn’t a lot of help! I wore my linen Farrow dress I’d made recently and also the coat I made earlier in the year. [I didn’t get any photos of this activity so you’ll have to take my word for it happening] We spent the remainder of the afternoon sewing.

Those of us that didn’t live in the area were staying up the road at a hotel so we headed back there to freshen up before going out to a local restaurant for a lovely meal. Because our number wasn’t huge, and we were spread over just 3 tables, it meant we could actually have conversations with some of our fellow-sewers. It was a lovely way to finish the day.

Saturday morning was set aside to visit the student shows which were taking place as part of the College Open Days for outside visitors.

I was absolutely blown away by all the wonderful work on display. There was so much originality, beautiful colour, innovative designing and covetable products, here a just a few of the many photos I took to give you some idea. 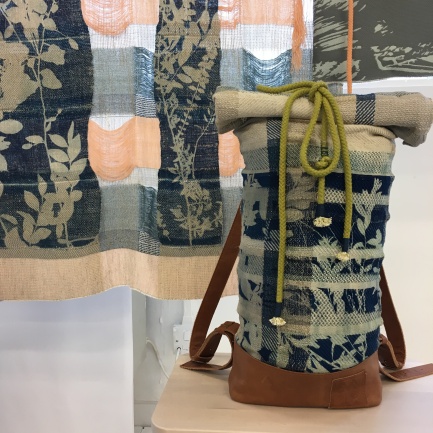 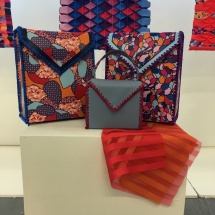 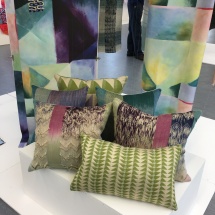 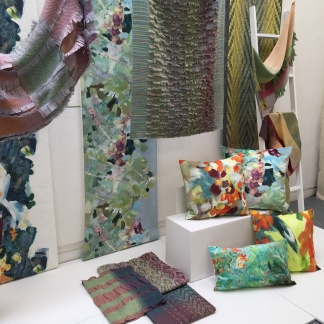 I WANT that rucksack!…and those cushions too…oh, and the handbags….

A few months ago Anne had contacted me to ask if I was willing and able to make up a garment for one of her students. Heather was a textiles student and she would print, embroider and embellish  fabric and then send it to me to sew up into a kimono for her. I was happy to do this and the parcel duly arrived. She’d marked out the placement of the main pieces so it wasn’t guesswork, I pinned the pattern on in the usual way and cut it out. She’d chosen the Kochi Kimono pattern by Papercut patterns and wanted it lined with silk noil. It all went together beautifully and looked stunning. I posted it back and thought no more about it.

I finally got to see it along with Heather’s other work, and by complete chance she was there with some friends so I actually got to meet to her and chat about it.

The original concept involved essential oils and using them and their effects on and in fabrics-hence the kimono embedded in a planter with mint plants! 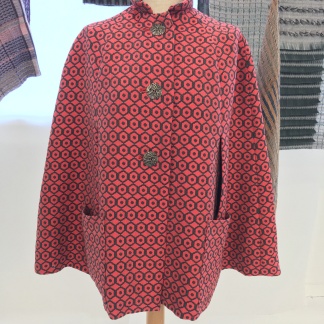 I ‘nearly’ made this cape for another student but the loom broke down and then the timing didn’t work out so someone else made it-it looks lovely and the buttons were fabulous. 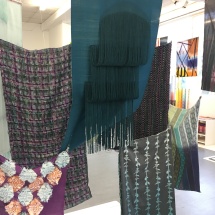 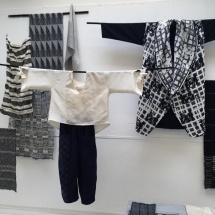 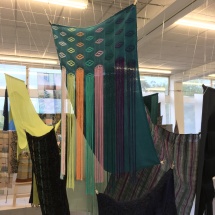 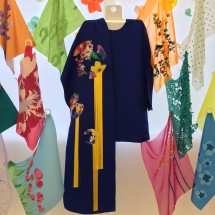 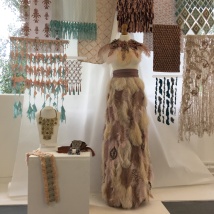 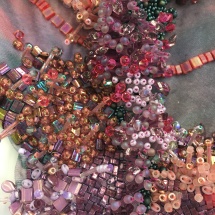 Look at this fabulous neckpiece! The bead work must have taken hours and hours.

After seeing all this inspiring work it was back to sewing our own work. In spite of my ‘issues’ with the sewing machine I was making good progress with my dress. Having the use of amazing industrial steam irons (Anne had given us a H&S talk about it the day before-basically, it’s nothing like our steam irons at home!!) really helped the process and I even used the industrial rolled hem machine on the edge of the ruffle. It was speedy, quiet and gave a beautiful finish, the version my domestic overlocker does will never compare now, sadly.

After lunch Salva and I had our session on the A-MAZE-ING embroidery machines. The lovely Bea, who was endlessly patient and enthusiastic with us all weekend helped us to choose and create an embroidery to take home. Some girls had made things specifically like jeans pockets but I’m going to put mine in an embroidery hoop in Threadquarters when I get home.

These machines are serious pieces of kit-there are 3 of them-and there’s a vast number of threads to choose from too. As I have magpie tendencies of course I chose metallic threads! 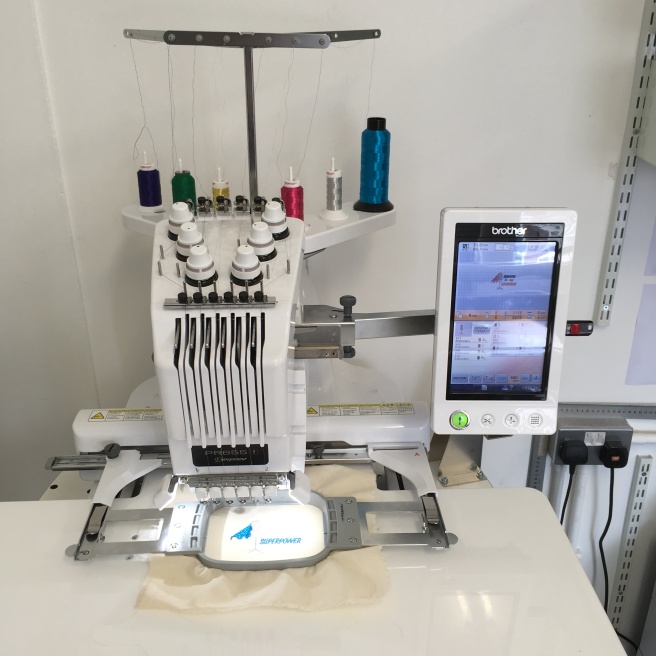 I settled on the mantra of every home-sewer…

There wasn’t much time left after this but I managed to finish my dress and have a quick try on-I didn’t actually expect to have a finished garment to take on bearing in mind how many activities we’d packed into 2 days. 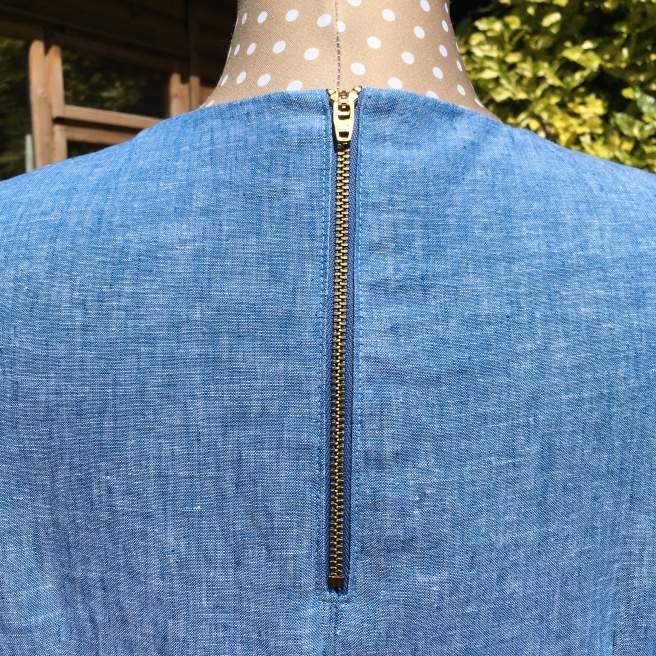 And finally it was time for goodbyes…we all agreed how much we had enjoyed our 2 days and Lucy and Anne had created an wonderful event for us. I hope they’ve had a well-earned rest now! If they decide to do it all again next year I really hope I’ll be invited, the small number meant we all chatted at some point with every other person there, something which doesn’t, or can’t, always happen at bigger events.

I can’t thank Anne and Lucy enough for creating such a lovely event and for inviting me to attend it. Thank you too to all the generous sponsors for their gifts and support. Roll on next year….