I finally managed to get to this gorgeous exhibition the other day and it was frustrating to think it was both ‘worth the wait’ and ‘why did I wait so long!’  Whatever the answer I really glad I did.

I’ve loved the V&A since I was about 14 or 15 when I was studying for O-level Needlework (!!) and I used to visit to draw the clothes that were on display in what was then known as the Costume Court. I would sit patiently in front of the cabinets to sketch the details of historical garments, it’s definitely where my love and fascination for the construction of garments began. 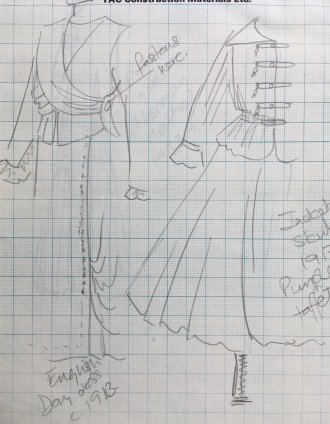 Amazingly I found some of my original sketches from that time (although if you look carefully one of them seems to have been tampered with by a small child!) They were drawn on graph paper donated by my Dad. At that time I’d decided I wanted to be a costume designer, although through a few educational twists and turns I finished up doing bridal and evening wear instead which was the next best thing. Fortunately since then the fashion galleries have moved on a fair bit in the way they display things now, more rotation of garments from the collections and less dusty mannequins. That said, a few of my favourite garments from that era are still on display so I can still get my nostalgia-fix.

Nowadays they utilise the central downstairs area to host changing exhibitions along with the upstairs gallery. [This is was an inspired move in my opinion because all that the upstairs area used to contain was ancient dusty stringed instruments and, as far as I could tell, no one ever went up there!!]

And so to Balenciaga…he was a Spaniard born into a humble background in 1895 who eventually worked for almost all of his illustrious career in Paris and came to be hugely respected and influential amongst the pantheon of great designers.

He developed innovative ways of handling fabric to create extraordinary shapes and styles, many of them had hidden foundations which enabled them to hold their shape. Fabric was all, it was always his starting point and the design came from there, not the other way around. He was extremely proficient in all aspects of the design process, he understood fabric and its capabilities, so he could drape and cut the fabrics into his chosen shapes, he was an expert tailor, pattern cutter and could sew too. Not every designer is capable of all this and many rely on the expertise of others to realise their visions. I have great respect for designers like this.

One thing that is different about this exhibition to most others I’ve been to at the V&A is being allowed to take photos-I can only assume this because they’ve given up trying to stop people, or they don’t need to protect anyone’s copyright or intellectual property??

The dress in the foreground here was, apparently, adored by fashion editors of the time and much photographed. Only a few were sold though because it was nearly impossible to go to the loo whilst wearing it!!

The exhibition has a several displays at the beginning which illustrate Balenciaga’s use of fabric and his swatch system and the designs that stemmed from it. 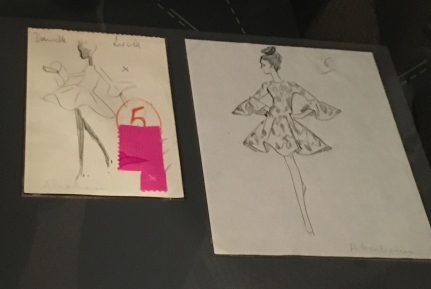 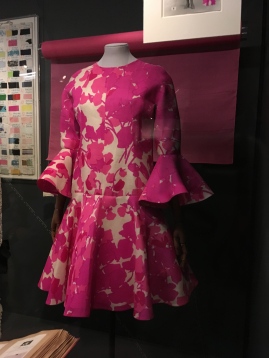 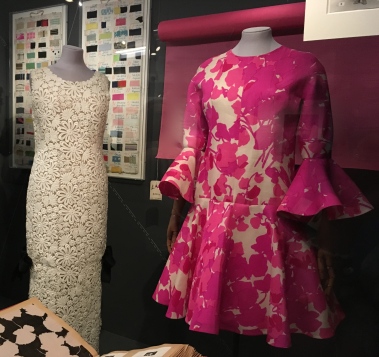 His Spanish heritage was often a source of inspiration too, boleros being typical of this but also the use of lace and flamenco-influenced ruffles and flounces.

The whole of the downstairs part of the show is given over to Balenciaga’s own designs for both his couture collections and the ready to wear line that he also developed. There are evening gowns, coats, day dresses, tailoring and pant suits. There’s an opportunity to try on mock-ups of a garments for yourself, and there are also a number of toiles that have been recreated in calico by MA students from UAL including Claire-Louise Hardie who blogs as The Thrifty Stitcher and who was the sewing producer on the Great British Sewing Bee series.

There are several exquisite beaded coats and gowns as well as a fascinating accompanying video showing exactly how the beading is done-don’t miss it, it’s enthralling.

I adore this dress, my photo doesn’t do it justice as it’s a vibrant fuchsia pink in reality. On the wall behind is one of several specially commissioned x-ray photos taken by Nick Veasey and showing the secret interior construction of the dress.

This is a strapless gown that has been turned inside out so that you can see all the details that mean the dress won’t fall down! My previous blog from a visit to the FTM also tells you about my ‘hands on’ experience looking inside beautiful couture clothing, read it here.

Upstairs there are lots more clothes created by many contemporary designers who acknowledge the debt that their designs owe to Balenciaga’s influence. These include Roksanda Illincic,  Erdem and Nicholas Ghesquiere, who became chief designer in 1997 when the Balenciaga brand was reinvigorated for the 21st century.

There’s so much more to see than I can show here so I’d urge you to go along to the V&A if you love finding out about the history and development of fashion design. This exhibition is on until February next year so there’s plenty of time at the moment. Make sure you look around the rest of the fashion exhibits that are on display in the surrounding gallery too-there are so many interesting garments, often dating back centuries, and you can see the influence and development that they’ve had on clothing over that time.

I’ve been a member of the V&A for 3 years now so I can go as often I like to their exhibitions but, as ever, all opinions here are my own! I hope you enjoy this show as much as I did and I’d love to hear your thoughts on it.

8 thoughts on “Balenciaga at the V&A”