After the success of my first Zierstoff PDF pattern (the Sue which you can read about here) I was keen, as soon as time allowed, to try another style. I opted for an intriguing-looking bolero called Sophie which has a lovely slouchy shape.

This time I didn’t have any trouble printing the pattern either, I simply checked I had it in the correct rotation by printing the first page off, it was right so I printed the rest of the pages. The Sophie pattern only needs 7 sheets of A4 too which is amazing! At £4.80 it’s very good value too.

As I described in the previous blog Zierstoff uses a system of rows and columns which is extremely simple to piece together. You might notice that a few of the lines aren’t quite in alignment but that’s more about my printer than their system I think. There are only TWO pieces to this pattern! The whole jacket and two sleeves (OK that’s three but it’s only 2 pattern pieces!)

I didn’t have any suitable fabric in the ol’ stash so, as I had a Saturday that didn’t feature any specific plans, I went up to Walthamstow to see if the fabled ‘Man Outside Sainsbury’s’ had anything suitable. I actually combined it with a visit to the William Morris Gallery which is a 10 minute walk from Walthamstow station and well worth the effort. It’s the house he lived in as a teenager, it’s surrounded, now, by a lovely public park and has some modest but very interesting and informative galleries about him and his life’s work.

Once I’d spent an hour or so absorbing culture I headed back up the road to the by now busy and vibrant market. Walthamstow has, over the years, become a very diverse and multi-ethnic area which means there are a wealth of varied and fascinating shops and stalls selling all manner of things. My primary interest though is the fabric and haberdashery shops and stalls, of which there are several. Karen at Did You Make That? blog has produced a downloadable map here which is helpful. Even though it isn’t that recent I believe most if not all the shops and stalls are still there.

I was quite restrained this time and only bought things I ‘needed’ including plain cotton lawn for lining at £2 per metre from TMOS and a patterned lightweight denim from him too. I got the double-knit jersey for the Sophie bolero from Saeed’s fabrics, and finally I got 5yds of teal polyester with a fan print on it from Classic Textiles for £1 per yard!! [they price in yards and metres, metres is dearer and I wanted a straightforward £5-worth…simple as that!]

Because the fabric is double-faced I thought it might be a good idea to use a flat-fell seam which would mean that the bolero could be reversible.

You can only really use flat-felled seams in applications where you’ve got complete and easy access to where you’re positioning it because of the method of construction [if you look at the legs of a pair of jeans the flat-fell seam will be either on both outside legs OR both inside legs, not both]

Sewing the bolero together is a doddle because there are only 4 seams, 2 sleeves and 2 side seams so (even quicker if you’re not using flat-felled seams!) it goes together in no time. I chose to neaten the edges by turning the striped side over to the patterned side to give it a contrast.

I also added a little marker to the CB neck so that I know which way up to wear it! It’s a bit tricky to tell the difference otherwise…

So I’ve finished up with a super-quick, reversible bolero which will be really handy on holiday because it will roll up small and come out largely unscathed. 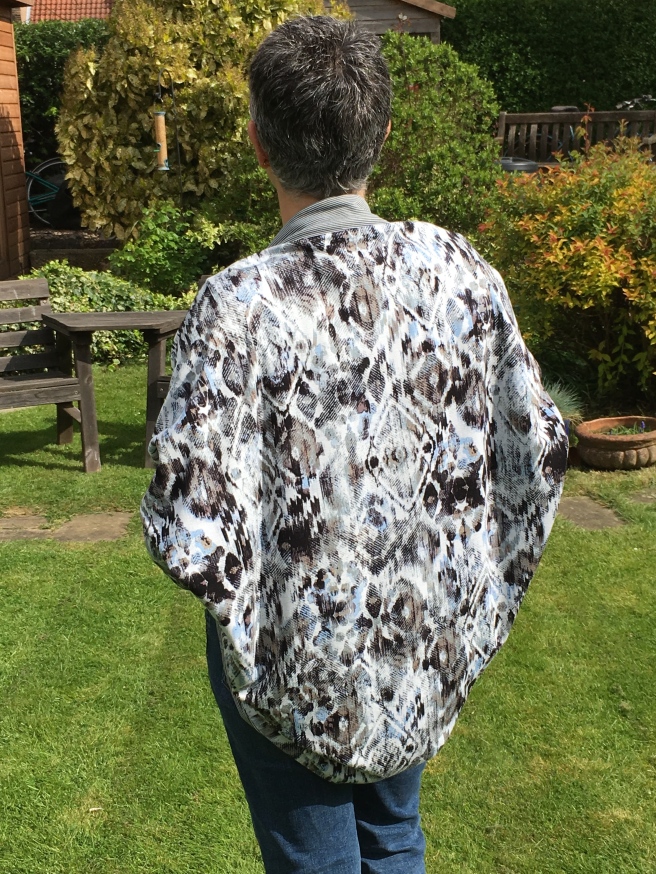 Have a look at the Zierstoff website if you’re a fan of sewing jersey because they have a variety of patterns as styles specifically for knits. I’ve been generously given this pattern to test but the opinions I’ve expressed are entirely my own-I always try to be honest about the patterns I try out because I think it’s not in anyone’s interests to make statements which I don’t believe in, aren’t instructive or could be misleading.